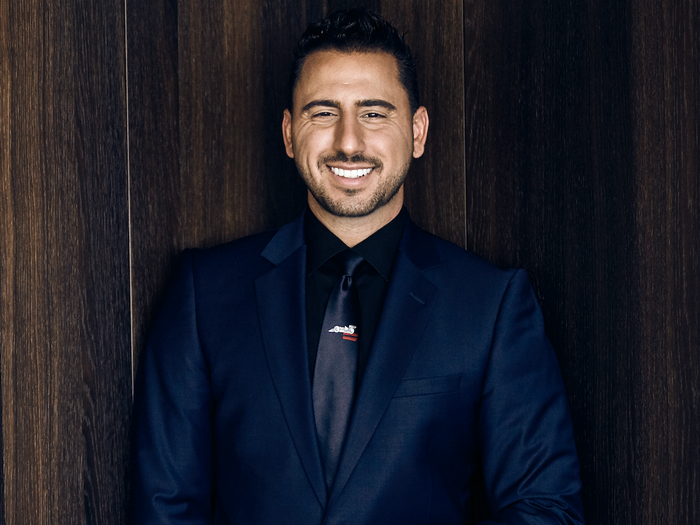 Josh Altman talks about his rise and fall and rise again in the real estate game.

“I’ve had the opportunity to travel the world and share what I’ve learned with the entrepreneurial and sales community,” he says. “It feels like I’m giving back and has been amazing.”

1. You can’t predict where your next big idea will come from.

“I moved out to L.A. and started in the mailroom of a music management company called The Firm.

I would put half of my paycheck away and use the other half to take out the managers to pick their brains.

I found out that they were all making extra money on the side in real estate.

My brother and I had no money — we paid someone to live on the couch in a fraternity house.

We did some minor renovations and in six weeks flipped it for $600,000.

We thought we were fucking millionaires!

2. Flipping can flip you out.

“We started buying and flipping nicer and nicer places.

We were killing it and really knew nothing about what we were doing.

I decided to get my real estate license, and I failed twice.

The third time was a charm!

Then I decided I would stop paying other people and opened up my own mortgage company.

I got this huge space in L.A. and I hired all of my friends and it was it was insane.

You could just give mortgages away at that time.

And as fast as we were making money, we were spending it.

It’s embarrassing to talk about it now, but we never thought that it would stop.

And then it did.

We very quickly went from becoming millionaires at the age of 26 to being flat broke within a year.”

3. Remember what you love to do.

“I couldn’t get out of bed for eight months, but I’m lucky enough to have my brother.

We motivated each other.

We found ourselves on the weekends driving around to check out houses just because it was free.

And it was like, ‘Look, why don’t we just become realtors again?

We love this!’ So we started doing that and slowly worked our way out of our hole.

In a 24-month period, we sold about $500 million residential real estate.

We built the business now up to you know selling over a million dollars a day.”

“That’s my brother’s and my mentality.

Yes, that is not the normal order.

It’s all about being able to recognize an opportunity when it’s in front of you and just take a shot before it passes.

I see it all the time when I talk to entrepreneurs — there is too much time spent trying to perfect the potential of a business rather than just going for it.”

5. Put your customers on repeat.

“We’re in the customer business.

Everything we do revolves around the people that we sell houses to.

Because you know what?

They’ve got a lot of wealthy friends who probably want to buy or sell houses, too.

We realized that it wasn’t just about helping people find their dream house.

We’re the guys that our customers can come to for anything they need: getting reservations at the hottest restaurants, getting them at the front of the line for a new watch that nobody can get, whatever they want.

We have cultivated all kinds of relationships around L.A. with different people over the years, and those put us in positions to help our clients out.”

READ ALSO  How to Successfully Build Your Own House in Nigeria

“The worst thing you can do to a wealthy person is waste their time.

You can only get so far with ‘fake it ‘til you make it’ like we did.

At some point, you’ve got to become an expert.

We pride ourselves in knowing everything about the L.A. market.

I am on MLS (Multiple Listing Service) all day, every day.

Wealthy people value smart people and they keep coming back for more as well.

Once you make somebody’s money, you are on their speed dial for life.”

“I tell everybody in any business to always look at the big picture.

I see deals get killed all the time over small stupid stuff.

You’re going to have these people for life and you’ll have the potential to do 10 more deals in the years to come.

“In the beginning of your career, you have to take whatever listing or client comes your way.

But as I’ve become more established, there’s nothing worse to me than having someone bring bad energy to the table.

It just puts me in a shitty mood.

I always say this to my agents: You’ve got to make money, you’ve got to eat, but at some point, you’re going to get to a point in your career where you can start to avoid these shitheads.

I find myself saying that a lot more lately now that I have a six-month-old daughter at home.”

9. There are odd consequences of being on TV.

“I’m on a TV show where you see us making money and counting our commissions and all that shit.

But you have no idea how many people a day come up to me and pitch me their products.

So you know I’m friends with some of those guys, but it’s a different show!”

We have put together a special “high income realtor training” for those who want to venture into the real estate industry and make a lot of money from it either part time or full time.

Click here to access your High Income Realtor Training and start earning huge commissions in as little as 90 days or less..

How To Make Millions In Commission Selling Real Estate In Nigeria.

NOW, you can learn a new, insanely profitable strategy of selling REAL ESTATE in Nigeria – it’s free, but this offer expires soon.

Enter Your First name and Email Address Below and have it sent directly to your inbox.

Please log in again. The login page will open in a new tab. After logging in you can close it and return to this page.

How To Make Millions In Commission Selling Real Estate In Nigeria.

NOW, you can learn a new, insanely profitable strategy of selling REAL ESTATE in Nigeria – it’s free, but this offer expires soon.

Yes, Send Me the Free Report

No thanks, I’d like to stay in the dark.

Get the Free Report in Your Inbox:

Please enter your name and email address below to receive your Free Report - sent to your inbox for instant downloading.